Decades of Republican control has wreaked havoc on New York. Will they keep their 2016 campaign promises, or deliver more of the same

For almost half a century, Republicans controlled the state senate with an iron fist. They cut the Democratic Minority out of power, and locked the people of New York out of government. All the while they conducted backroom deals for their own benefit and the benefit of the special interests fueling their campaigns.

Republican rule was characterized by sky-high tax rates, out-of-control spending, and fiscal gimmickry to hide the true costs of their irresponsibility.

Senate Republicans have failed New Yorkers. For over 40 years, they passed tax-hike after tax-hike on the middle class to fund outrageous, unnecessary, and redundant programs.

Republicans had over four decades to lower taxes and bring real relief to New Yorkers. For forty-four years, they failed to deliver on their promises to New Yorkers.

During the final three decades of the Republicans Majority, New York State had the highest state and local tax burden in the nation for 27 out of 30 years. In the other 3 years, New Yorkers shouldered the second highest tax burden. Three New York counties rank in the top ten most taxed in the nation.

Republicans claim to be fiscally conservative, but their record tells a different story. While New Yorkers tightened their belts, Republicans went on a spending spree.

Between 1984 and 2008, state spending increased by almost $100 billion – many times the rate of inflation. Despite promises to rein in spending, Republicans violated their own “spending cap” 24 times in 28 years.

During the Pataki-Bruno era, spending not only rose dramatically, but Republicans proved unable to pass an on-time budget. Ten out of 12 budgets were late for a total of 819 days – the equivalent of nearly three full years.

Thanks to Republicans’ tax-and-spend style of governance, the debt load attributable to every man woman and child in New York soared from $1,774 to $2,675.

Despite a strong economy during the 1990s, Republican spending habits and failure to hold accountable public authorities and corporations resulted in a near doubling of the state debt between 1997 and 2008 from $31billion to $54 billion.

The shocking extent to which Republicans used the government as their personal piggy bank, and doled out favors to each other and to supporters, was revealed in 2008.

A report by the New York Times uncovered how Joe Bruno and senate Republicans spent millions of dollars of taxpayer money on perks like the “Bruno Mobile,” and inappropriately used Senate resources for political purposes.

Decades of unethical behavior by Senate Republicans were epitomized by their obstruction of ethics reform and the trial and conviction of former Majority Leader Joe Bruno, who was found guilty on two counts of felony corruption for using his office to reap a $3.2 million pay day. 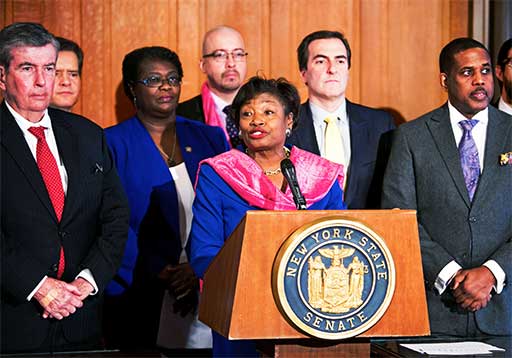 State Senate Democrats have won incredible victories all around New York and secured a governing majority.

Sign up for email updates here and proceed to the main site for more information about our growing conference.

State Senate Democrats have won incredible victories all around New York and secured a governing majority.

Sign up for email updates here and proceed to the main site for more information about our growing conference.